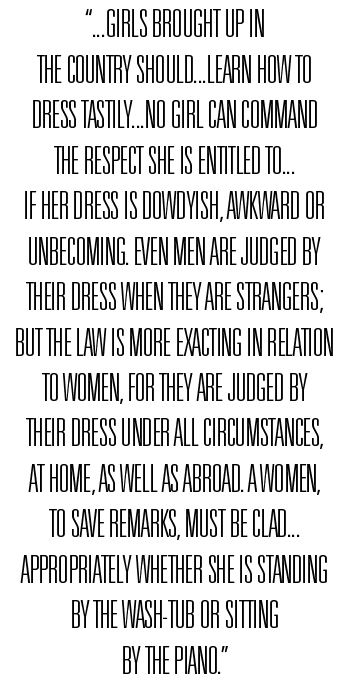 As the Industrial Revolution spread through the eastern states, factory work drew people from the countryside to rapidly expanding cities. At the same time, thousands of migrants were moving to the newly opened land in the “West,” which in this time extended as far as Illinois and Missouri. As families and individuals moved from more settled areas of the East to western regions or from small rural, close-knit areas to larger towns, it provided an opportunity for individuals to remake themselves.

Clothing, always a cultural marker distinguishing economic class, became increasingly useful to identify one’s social peers in a sea of strangers. When social climbers adopted a higher level of dress than their economic status warranted, however, there was widespread suspicion that they could trick and maybe swindle unsuspecting individuals, leading them down the path to ruin. The result was a reliance on codified behavior to mark refined and thus respectable individuals. Proper behavior and proper dress, in the minds of many, mirrored a pure heart.

Culturally, these ideas paralleled the Romantic period spreading through European literature and art. In the Romantic era, sentiments and affectations of emotion were valued higher than the rational thinking of the Enlightenment and classical influences of the prior decades.

Popular literature touted young heroines who swooned and died of a broken heart. In carrying out this Romantic ideal, fashionable women were to appear pale, overly thin, and distinctly unhealthy in appearance. This weakness of body communicated a pureness of heart.

To escape the ever-encroaching industrial economy, women embraced Romantic era dresses modeled on idealized versions of Medieval or Renaissance fashions that harkened back to what they imagined as simpler times. These dresses enhanced women’s wispy, feminine persona. Wide skirts and sleeves were offset by a nipped-in waist line. After years in high waist empire dresses, this dress form marked a return to the corset, which was to intensify in years to come.